Not Your Typical Rainy Day Out in London Town: St. Paul's Cathedral 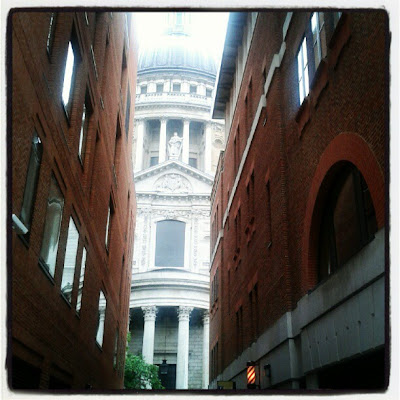 The wonderfully imposing structure of St. Paul's, standing since 1710 when it arose from Christopher Wren's imagination, still glowering austerely down over The City of London

After eight years of living in this ever impressive metropolis, I finally climbed up to the top of St. Paul's on Thursday.

We arrived at the cathedral rather late and it's a bit of steep climb into your pocket just to afford admission at £15 a pop, which struck me as rather strange given that it's part of a Christian institution and given that there was such a public outcry when the Occupy Londonmovement 'prevented' worshipers and tourists from enjoying the grandeur of the great edifice. A cynical person might think the loudest outcriers were cityites attempting to rid themselves of any guilt pangs they felt about the act of trudging to and from the freemarketeering that brought one of the world's mightiest economies to its knees, endeavouring as it were, to sweep any reminders of unpleasant truths out of the bastion of beauty added to the world that sits amid the tax collectors. I digress.

We arrived rather late and were debating about the worthiness of the price and the idea of walking across The Millennium Bridge to The Tate Modern when we decided, well how many St. Paul's Cathedrals are there in the world? As it happens, the price turned out to be worth it because here's your cheap living in London tip of the day: Gift Aid the money you pay for your ticket, and it turns into a reusable ticket for a year. Is there enough grandeur, enough humbling enormity in the heights of the dome, stunningly forward thinking imagination in the design and famous people buried in the crypt to make you want to go back for a second, third and fourth visit? Certainly, and I am glad I paid the price for it.

But I am not great with heights. Fortunately, I decided to bite the bullet and not let my jittery sense of vertigo stop me form one of the most breathtaking sights in all of London. As with the CN tower in Toronto nine years ago, the nearest children to hand were braver than I was when we reached the top and there was a small glass in the floor from which you could see all the way down to the Cathedral floor. Of course, the nearest child this time around was my own, but at least I haven't passed this particular anxiety on to him.

And the view at the top was awe-inspiring. And humbling. Say what you like about old London town. There is a fierce and terrible beauty in those rows of slate grey emanating stories told and untold, generations upon generations of that wonderfully gruff mixture of peoples that make up this city.

﻿ ﻿﻿﻿I feel civically and globally obliged to mention that there was  protest the day we went. It was led by a group called Jews forJustice for Palestinians. I felt fully in support of the protest as they were protesting against an insidious Anglo-Danish company called G4S, a company that is contracted by the government to deport asylum seekers.

The protest was also supported by The Boycott Israel network, about which I feel deeply ambivalent. I get the fact that the state of Israel has some deeply unsavoury policies, especially amongst hardcore Zionists, but I also know from having worked with Jews now for six years that, oddly, not all of them are Palestinian-hating hardcore Zionists and the Israelis who are most likely to be the exceptions, the liberals, the intellectuals, the open-minded Palestinian sympathizers are also the ones who are likely to be the actresses, actors, and academics who come over here to speaking engagements or to bring over productions of The Merchant of Venice in Hebrew and who are going to suffer because of boycotts. It just seems like a classic example of organisations making enemies out of exactly the kind of people to whom they should be reaching out.